Check out these Anime Characters With Short Black Hair! 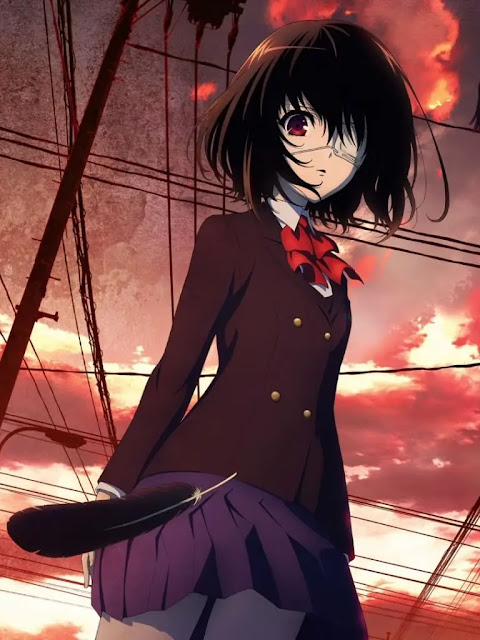 Mei is a little girl, one of the tiniest in her class, with pale skin and dark black hair. Her eyes were initially red, but her mismatched irises are due to her left eye being prosthetic; a doll's eye that can see things better kept unseen, as Mei tells it. Mei's mother gave her the glass eye when she lost her natural eye to sickness when she was four years old; the eyes are a different color since Yukiyo Misaki thought matching eyes were uninteresting.

She can be seen wearing the normal female uniform, but she has been seen in a variety of clothes throughout the series, particularly when she is with her twin sister. 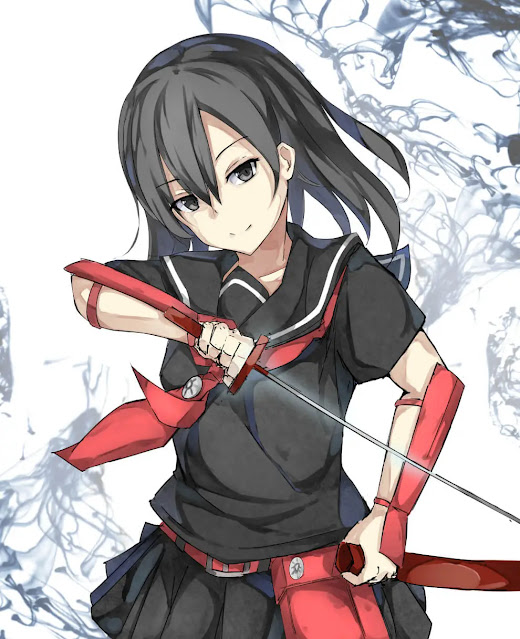 Kurome is Akame's younger sister and a former member of the Jaegers. Her parents sold her and her sister Akame to the Empire, where they were trained as assassins. Her sister was enlisted into a different assassin organization, and the siblings split off.

Kurome has a striking resemblance to her sister. She has black eyes and short black hair in a twintail style. She is dressed in a black sailor uniform with a red belt and a red side skirt cover similar to Akame's, as well as long black socks and black shoes. Her shirt is a tad too short because it exposes her belly button. She, like Akame, wears red gauntlets. She always has her Teigu on her person. 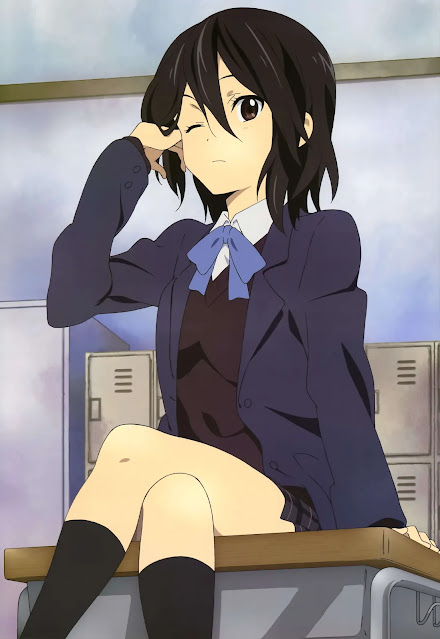 One of the key characters in the Kokoro Connect series is Himeko Inaba. She is the vice president of the Student Cultural Society and a classmate of Taichi Yaegashi and Iori Nagase in the first four volumes. She is an expert at obtaining and analyzing data, and as a result, she is privy to numerous personal details about her fellow club members. Inaba, despite her calm and logical demeanor, has a hard time dealing with awkward circumstances and dislikes things getting out of her hands.

Inaba is a lovely young lady with shoulder-length black hair and dark eyes, with one strand falling in the middle. Her uniform sweater is brown, as opposed to the yellow sweaters worn by the majority of the other females. She is frequently described as wearing something mature or plain in her informal clothes. Inaba has been regarded as having good posture and a thin, yet lengthy form, as well as piercing, yet seductive eyes. 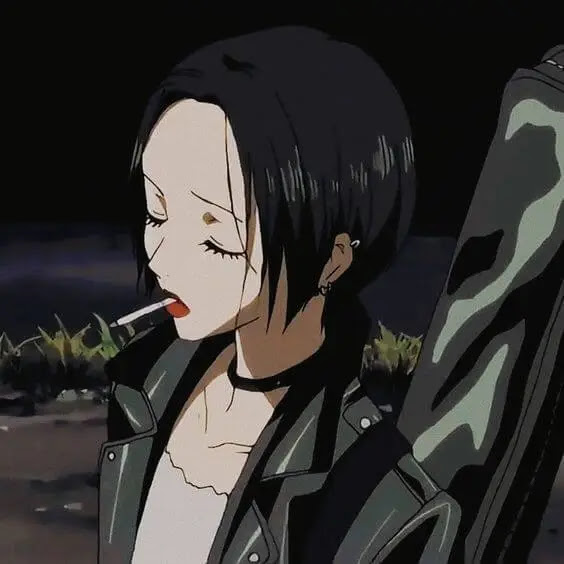 Osaki is a slim young woman with chin-length black hair that drapes on either side, brown eyes (green eyes on the PS2), and a pink/red lotus flower tattoo on her upper left arm (which she disputes with Nana Komatsu as a ren flower).

Her nails are long and slender, and she normally paints them dark red; she used to paint them black. Osaki also dyes her toenails red. Red lipstick, black mascara, and purple eyeshadow are her go-to looks. [Komatsu observes in Chapter 1 that Osaki has enviably long lashes and has five piercings in her left ear and three in her right.] 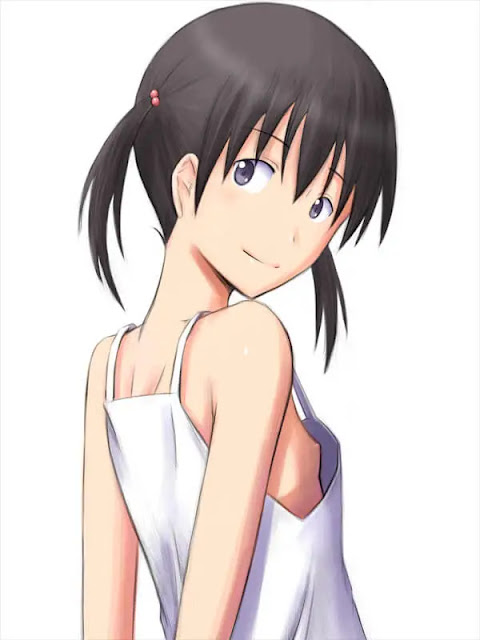 Chinatsu is a pretty nine-year-old girl with pigtails in her black hair, tan skin, and grey eyes. She occasionally wears her 'channeling object,' a toy ring, for magic. 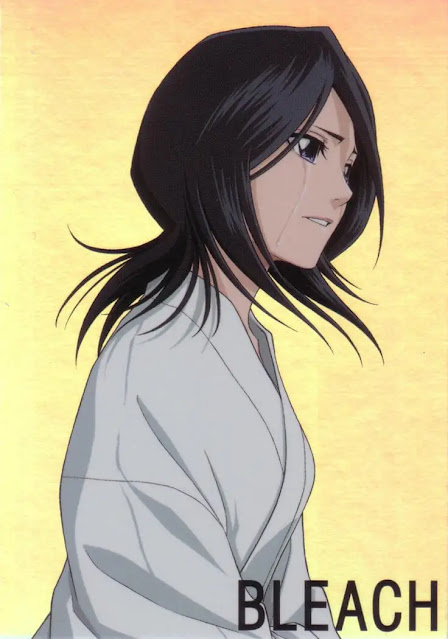 Rukia is a short, small woman with light complexion and purple eyes. Her hair is black, and she always has a few strands of hair hanging between her eyes. Byakuya has said that she looks a lot like her sister, Hisana Kuchiki. Rukia wears a normal shihakush as a Shinigami of the Gotei 13. Rukia's hair is chopped into a bob that hangs about her face 17 months after Aizen's defeat. 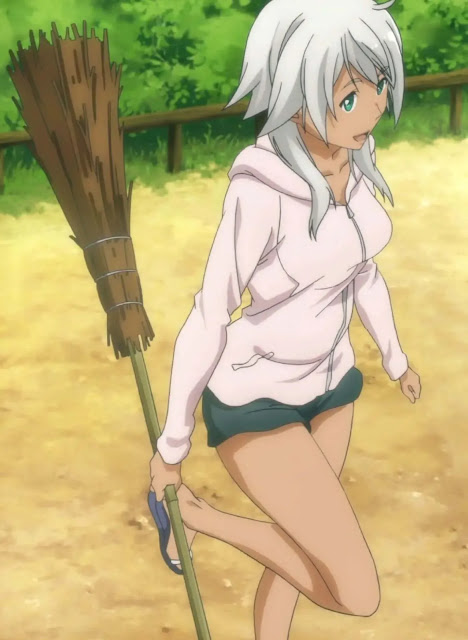 Akane Kowata is the older sister of Makoto Kowata and one of the main characters of Flying Witch. She is a full-fledged witch with enormous talent.

Akane is a sweet and outgoing young woman who exudes a carefree attitude while serving as a mentor to some of the characters.

Akane is a young woman with light brown skin, light grey hair that falls just below her shoulders, and green eyes. Makoto Kowata's eyes and expressions are quite similar to hers. 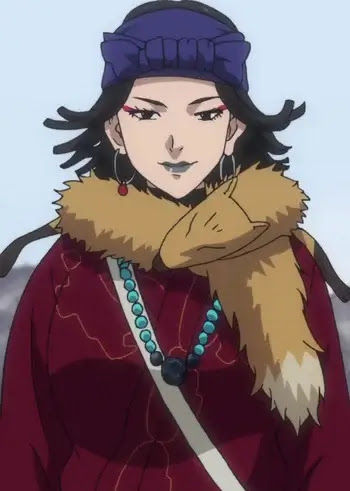 During Asirpa's travels, she meets Inkarmat, a mysterious Ainu fortune-teller. She claims to be privy to vital information concerning Asirpa and her father.

Inkarmat is dressed in traditional Ainu garb, which is dark crimson with elaborate patterns and long sleeves that expose only her hands. Her lips are covered by a little tattoo of her mouth. She's dressed in leather boots and a full fox skin over her neck, complete with a large bead necklace and earrings on both earlobes, as well as a sash purse slung over her left shoulder. Her dark, shoulder-length hair is hidden behind a navy blue headdress, and her earrings are adorned with red beads. 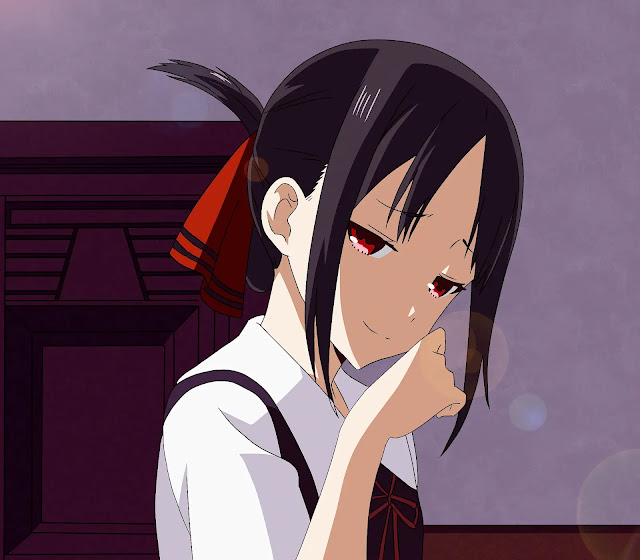 Kaguya Shinomiya is the eponymous character and one of the characters in the Kaguya-sama wa Kokurasetai series. She is a third-year high school student at Shuchi'in Academy, where she is the Vice President of the 67th and 68th Student Councils and a member of the Archery Club.

Kaguya is a lovely, fair-skinned young lady with long black hair that is usually tied with a black-red ribbon (her hair appears to be mid-back length when she lets it down), bangs/hair strands hanging on either side, large, almond-shaped red eyes (that can look sharper depending on her mood), thin eyebrows, and a slim, feminine build with a noticeably small chest. Her manga character profile describes her as having "amazing beauty." 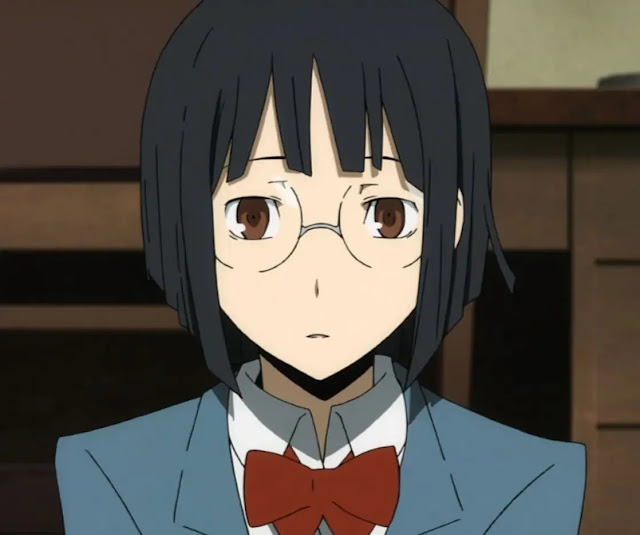 Anri Sonohara is a bespectacled girl who attends Raira Academy with Mikado Ryuugamine and Masaomi Kida, two of her closest friends. She is educated, clever, and resourceful, while being quiet and timid and having a propensity to isolate herself from others.

She normally wears a crimson bowtie with her Raira Academy outfit. She starts wearing a black hooded dress over a pink top with red sneakers in the second season. 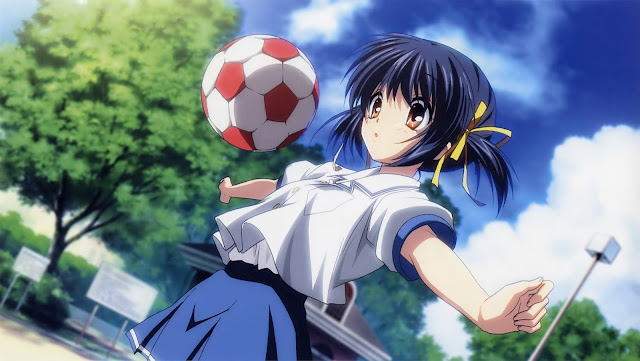 Youhei Sunohara's younger sister, Mei Sunohara, considers him a brother and lives in the countryside with him.

Tomoya Okazaki imagines her as a feminine Youhei Sunohara after first hearing about her. Mei, on the other hand, has the polar opposite personality to her brother.

Mei has black hair in pigtails tied with delicate yellow ribbons, bangs that obscure her ears, and amber eyes. 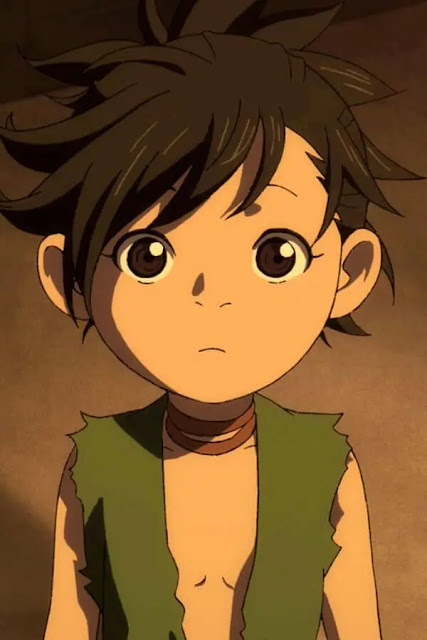 Dororo is the show's deuteragonist and titular character. She's an orphaned criminal who roams the streets on her own, looking for opportunities to steal and cause havoc. Dororo joins Hyakkimaru in his journeys and adventures after being rescued from a demon by him.

Dororo is a petite young lady with brown eyes and black spiky hair pulled back into a short ponytail.

Her robe is ragged and sleeveless, exposing the center of her chest. It's held in place by a thin white cloth tied around his waist and a little rag bag. He also has bandages on his wrists and ankles and wears a brown ribbon as a necklace.

She wore a red costume that covered her inner sleeve in her teen years, possibly a Kimono with long hair tied to the end, similar to her mother. 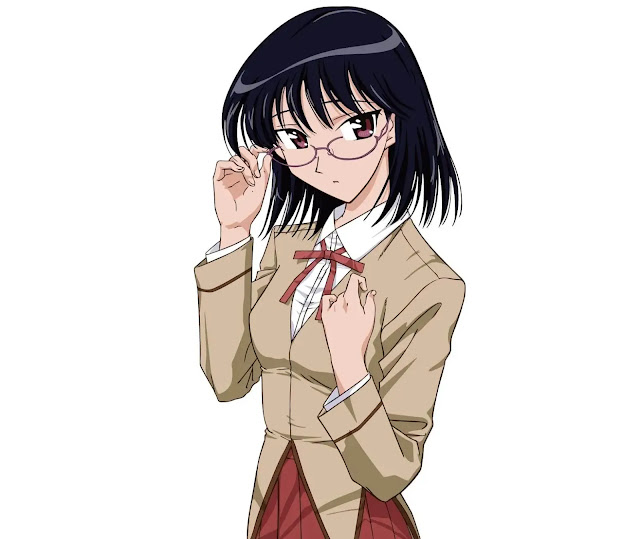 She may be soft-spoken (she doesn't say much), but she's more outspoken than her older sister, at least when something needs to be done.

Apart from her name, the combination of her eyes and black hair is the only thing that distinguishes her as Tenma's younger sister in terms of appearance.

Harima Kenji would almost certainly agree that she has an extraordinarily wide range of abilities. 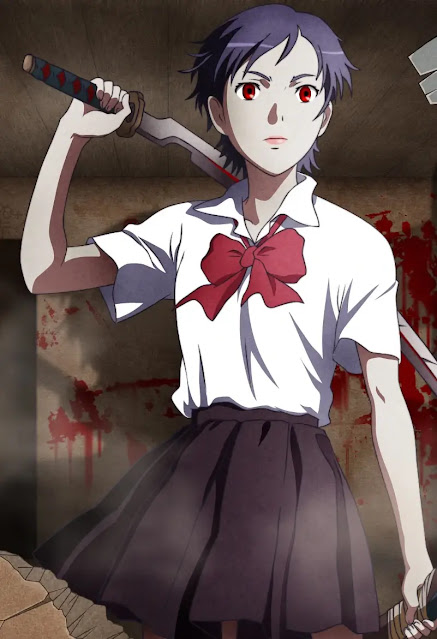 Saya has the rosy-cheeked appearance of a typical 16-year-old high school girl, standing 5'2" tall and weighing 89 pounds. She has black hair, which she has styled in many ways over the years, and brown eyes.

She used to have long hair that fell down her waist with the bangs knotted behind her back when she worked at the zoo. By the time of the Russian Revolution, she wore a pixie hairstyle.

She like to wear her bangs and hair in a pixie cut on Okinawa.

Her bangs have grown past her chin after Riku Miyagusuku's death, giving her hair the appearance of a bob cut.

Kai Miyagusuku trims her hair to mimic her Season 1 appearance in the last episode. 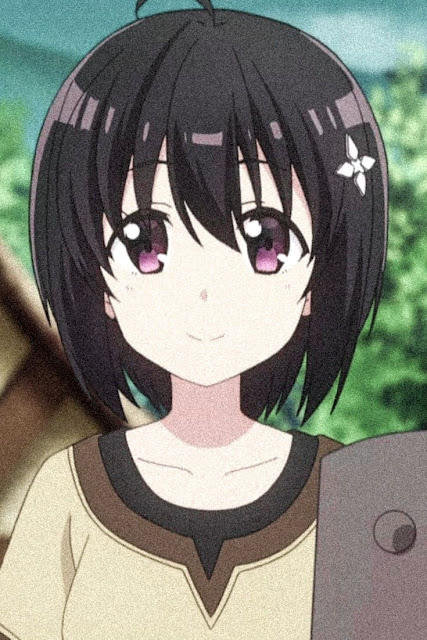 Kaede has fair skin and a short ahoge, as well as lustrous black hair that extends beneath her chin. Her eyes are a cold grey color.

In the real world, she wears a white clip as an accessory, which is carried over into the gaming world. The clip is made up of four rhombuses that face the cardinal directions and are joined by a diamond-like component. The clip resembles a compass in shape.

Kaede's go-to outfit is a white and pink striped hooded sweater with matching shorts that only reach her upper thighs.

Her in-game character is a carbon copy of her real-life counterpart. 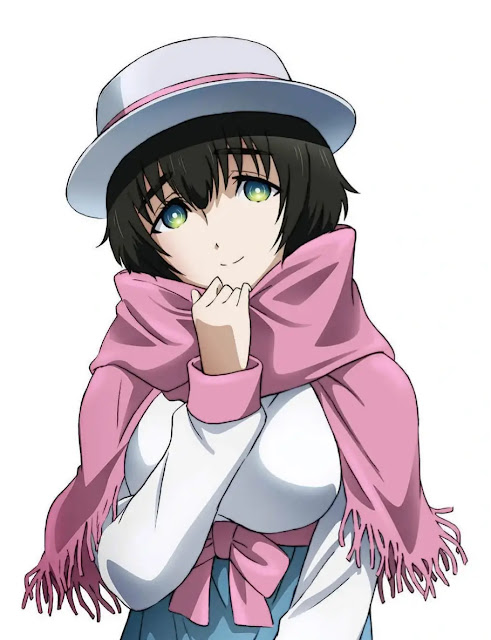 Mayuri is a short girl with short black hair that forms fringes on both sides, light-blue eyes, and heavy eyebrows.

Mayuri's clothing is basic and easy to wear, consisting of a light blue one-piece dress and a matching hat. She also has black tights on underneath her dress.

She wears a blonde wig wrapped into a long ponytail when she works at May Queen Nyan-nyan. 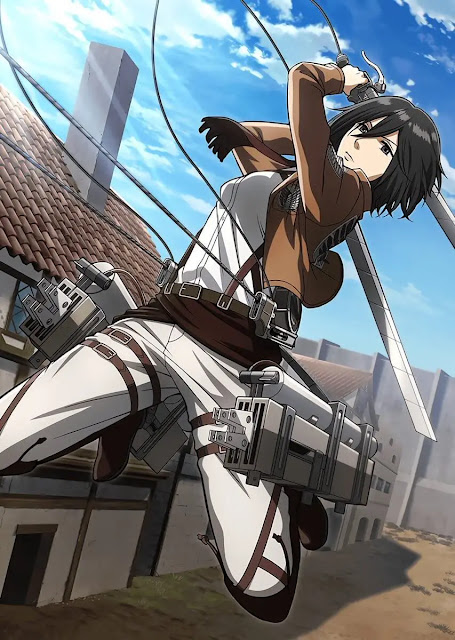 Mikasa is a slim, toned woman with a good figure. She has pale skin, gray eyes, and shaggy black hair that she used to wear long until she cut it to chin length.

Her hair is shorter and trimmed up to the back of her neck by the year 854, yet she still has considerably longer bangs. On the outside of her right wrist, she has a tattoo of the Azumabito family crest.

A slight scar appears beneath her right eye, the result of an injury caused by Eren's Titan during the Battle of Trost District. Mikasa's hair had grown notably long by 857 and was tied in a ponytail.