If we're talking about anime characters with headbands, the first thing that comes to mind is Naruto's, but there are plenty of other famous anime accessories.

In the eyes of the audience, an accessory or item does not have to be a MacGuffin to be memorable and symbolic, and several popular anime accessories are little more than something to wear or carry, even if they have sentimental importance.

Bellow Is the Top Anime Characters With Headbands! 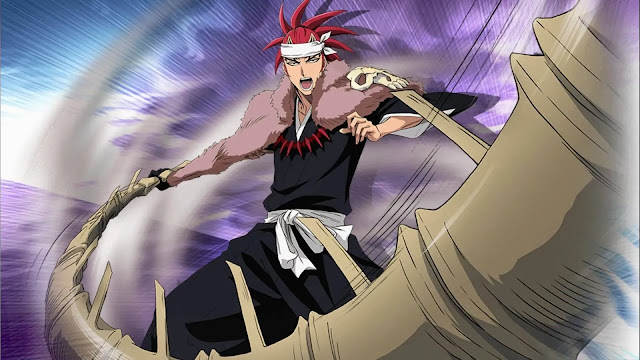 Renji Abarai is a lieutenant in Captain Byakuya Kuchiki's 6th Division and is married to Rukia Kuchiki. Under Kenpachi Zaraki, he previously served as the 6th Seat of the 11th Division.

He usually wears a standard Shinigami outfit with some sort of headgear, usually expensive glasses (bought all from Seireitei's popular Gin Tonbo store) or a white headband when he is saving up to buy new glasses due to each pair being broken in some way (and each pair costing half a year's worth of one of his paychecks). 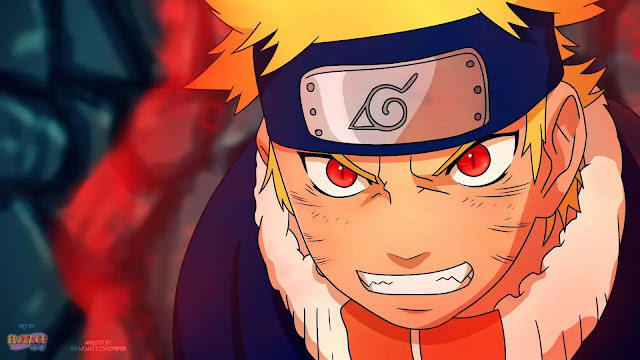 Naruto Uzumaki is a shinobi from the Uzumaki clan of Konohagakure. On the day of his birth, he became the jinchriki of the Nine-Tails, a fate that caused him to be despised by most of Konoha throughout his youth.

Naruto had green goggles on his headband before discarding them when he became a genin.

He was also dressed in orange slacks with a shuriken holster on his right knee, blue sandals, and a blue headband protection that Iruka had given him after he graduated from the Academy. 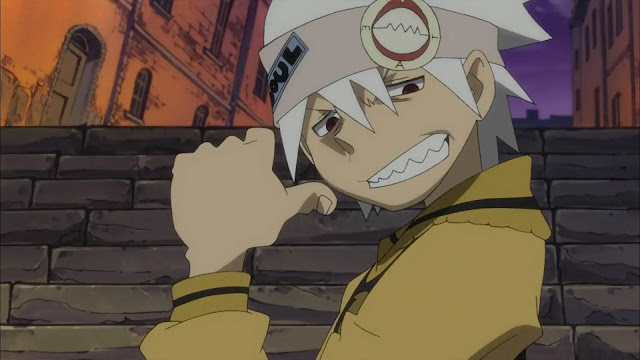 Soul Evans is a demon weapon who comes from a family of well-known artists. Soul joined Death Weapon Meister Academy after discovering his weapon skills as a demon scythe, where he collaborated with Maka Albarn, the scythe-meister.

His soul is light blue, with a top that resembles his hair, and it also serves as the Soul Eater series emblem.

This insignia may be found on the back of his first jacket as well as the headband he produces for himself and other Spartoi members during their Moon trip. 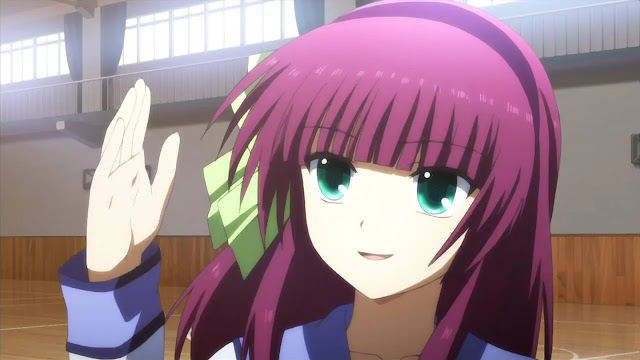 Yuri Nakamura is the female heroine of Heaven's Door and the deuteragonist of Angel Beats! She is the founder and leader of the Afterlife Battlefront, a school established in the Afterlife.

She is the leader of a large group of students who are fighting God, whom they blame for their bad luck.

She's dressed in black thigh-high socks and a hairband with a yellow/green ribbon dangling from the right side. She wears a white beret on occasion, most notably during operation briefings, as well as spectacles when using a computer. 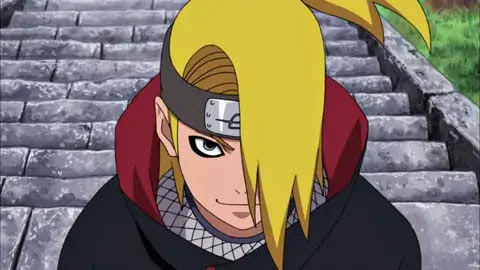 Deidara was an Iwagakure-based S-rank missing-nin. He was a member of the Explosion Corps during his stay in the village. He was pushed into Akatsuki after defecting from the community and was its youngest member. Deidara worked alongside Sasori until the latter's death, and then with Tobi until his own death.

Deidara wore a blue and grey kimono jacket with a fishnet undershirt inside and khaki slacks with sandals and a belt-like purse with a chain before joining Akatsuki. His blond hair was also pulled back into a lower ponytail and protected by an Iwa headband.

Due to the talisman implanted in his head, Deidara displayed the black sclerae and darker irides seen in other reincarnated shinobi when Kabuto resurrected him. Deidara's hair was looser because he no longer wore his headband protection. 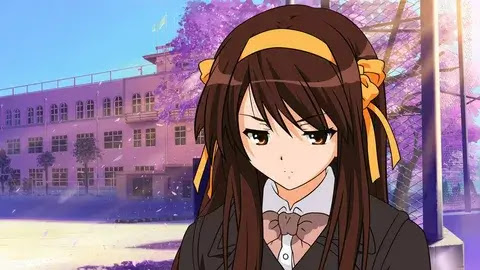 Haruhi Suzumiya is the protagonist and title character of the Haruhi Suzumiya anime series. She is a North High student who leads the SOS Brigade, a club at her high school dedicated to tracking out aliens, time travelers, and espers.

Her hair is long and reaches around her waist at the start of the series. Every day, she wore a different hairstyle. After speaking with Kyon about her hair, she decides to cut it to just below her shoulders.

Haruhi always wears an orange-yellow headband with ribbons on the side on her hair after deciding on a hairdo. Kyon is one of many male classmates who thinks she's gorgeous. 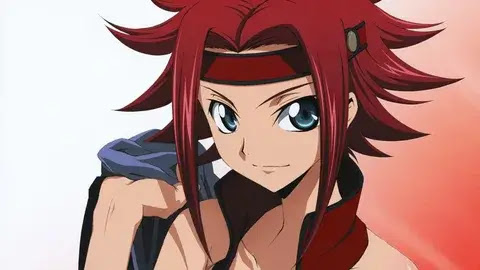 'Kallen Kzuki' is a major character in Code Geass: Lelouch of the Rebellion and one of the two protagonists in Code Geass: Lancelot & Guren. 'Kallen Stadtfeld' is her official name, and she uses it at school, but she prefers her mother's maiden Japanese name during her revolutionary activities.

Kallen is a young woman with pale skin and a thin yet strong frame. Her wide blue eyes and red hair, which she brushed down at school but spiked up while fighting or in her personal space, are her most noticeable attributes. She is significantly taller than C.C. and stands at an average height.

Kallen's combed-down hair and lack of a headband set her apart from the frail-girl image she projects. 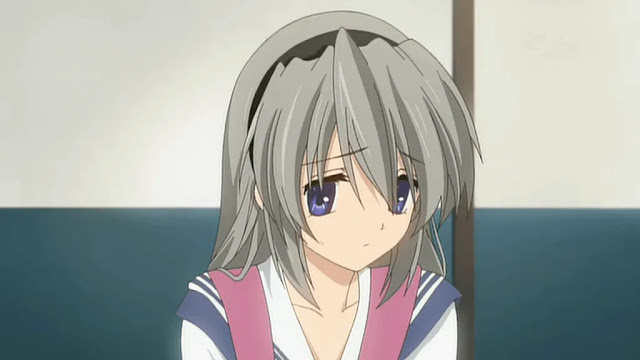 Tomoyo Sakagami is a key character in Clannad and the protagonist of the sequel visual novel. She is a fierce girl who beats up problematic delinquents and transfers to Hikarizaka Private High School as a second-year student in the spring.

Tomoyo Sakagami is a stunning adolescent. Her silver hair is long, straight, and reaches her upper thighs. She has unruly bangs and tresses of hair framing her face, and she wears a black headband. Tomoyo has a grim countenance and navy blue eyes. 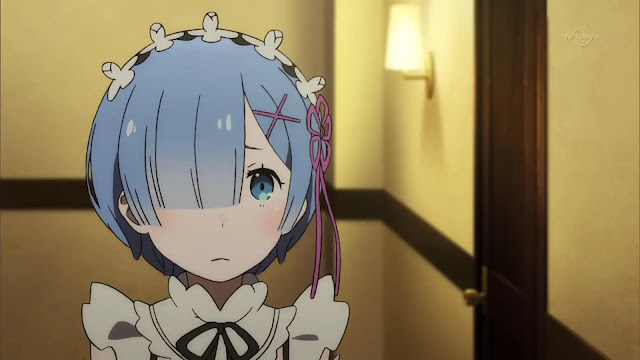 Along with her sister, Ram, Rem works as a maid in the service of Margrave Roswaal L Mathers. She plays a crucial part as one of Re:core Zero's supporting characters.

Rem is a young woman with medium-length sky blue hair that covers her right eye and huge light blue eyes. Hair clips on the left side of her hair, a flower-shaped ribbon on the same side of her hair, and a maid hairband complete her ensemble.

With the exception of her hair, eyes, and ribbon coloration, she is practically identical to her sister. She normally wears a maid uniform, and because her chest is somewhat larger than her sister's, she changes the dimensions behind her sister's back to hide it. 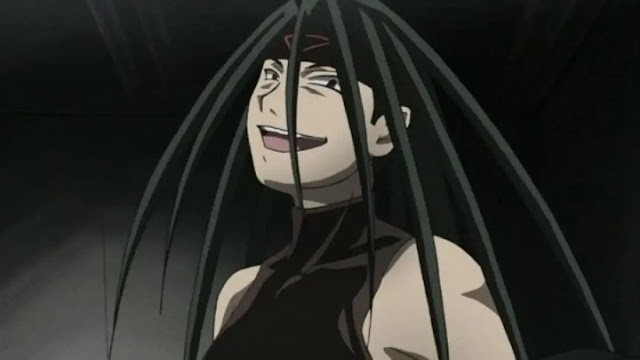 Envy is the physical manifestation of some of Father's envy. Envy has the capacity to change its appearance. This skill allows you to take on the appearance of any existing individual.

Envy is typically portrayed as a pale-skinned androgynous adolescent with a slender, muscular frame.

Envy has long, wispy hair, violet eyes with slit-like pupils, and a black crop top and skort with an alchemical triangular symbol on it, as well as a matching headband. 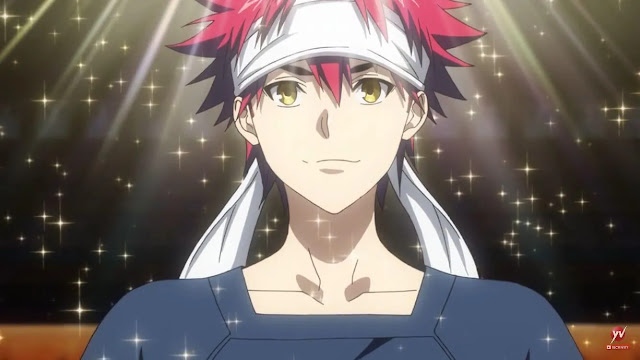 Shokugeki no Soma's primary character is Yukihira Soma. He is the proud owner of Restaurant Yukihira and the son of Jichir and Tamako Yukihira.

When Sma cooks, he wears his signature white headband around his brow. He wraps his bandana around his left wrist while he is not cooking or bathing.

Soma dressed rather casually in comparison to his fellow Ttsuki students; in his free time, he wears a hanten jacket with a basic white shirt underneath it and striped track pants at his places of living. Dressing in his hanten, according to Sma, helps him relax. 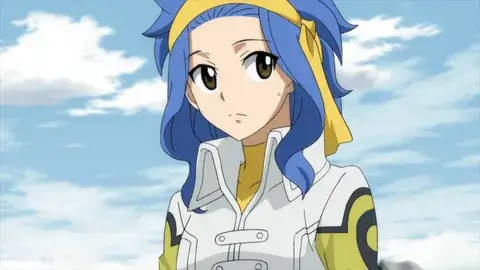 Levy McGarden is a Fairy Tail Guild Mage. She is the Shadow Gear's leader. She was a member of the Magic Council's Custody Enforcement Unit before leaving to rejoin Fairy Tail after the defeat of Avatar.

Levy is a small teenage girl with a slim frame and a height that is somewhat below average for her age. Her blue hair, which is shoulder length and has brow-length bangs, is usually wrapped back with a colorful headband. Despite the fact that she was first depicted as having straight hair.

3. Zero Two (Darling in the Franxx) 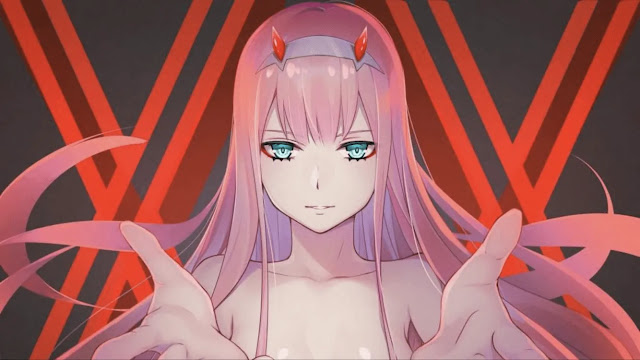 The primary heroine and deuteragonist of DARLING in the FRANXX is Zero Two. She is a member of the APE Special Forces and primarily fights on the front lines as a human-klaxo sapien hybrid. As a member of the elite parasite "002," commonly known as the "Partner Killer,"

She wore her pink hair down to her waist, with straight bangs over her forehead, red horns on her head, and a white limiter headband over her horns.

Zero Two's fangs and horns can develop at an alarming rate as a result of violently riding Strelizia. Even with her limiter headband on, her eyes turn crimson when she is angry. 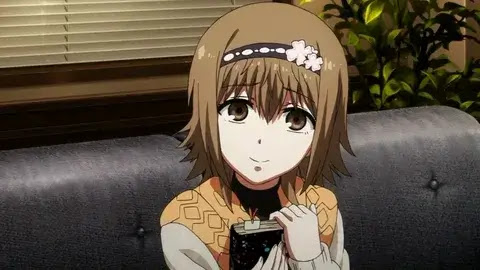 Hinami Fueguchi is a ghoul whose parents, Asaki and Ryouko Fueguchi, were ghoul investigators who killed them. She developed strong pseudo-sibling connections with both Ken Kaneki and Touka Kirishima after the incident.

Hinami is a young adolescent who looks a lot like her late mother. She wore a hairband with two four-leaf clovers, a popular motif for her, and had short, straight brown hair and brown eyes. 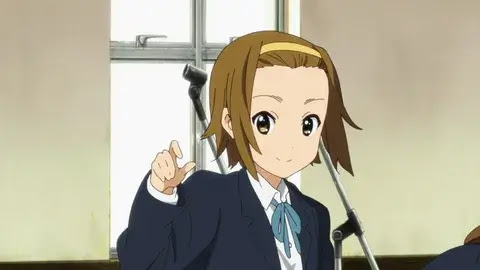 Ritsu Tainaka is one of the five major characters in K-ON!, created by Tsumugi Kotobuki and Yui Hirasawa. She is the drummer for the band Ho-kago Tea Time and the self-proclaimed president of the Light Music Club.

Ritsu's hair is held back by a dark headband with a large black-and-white striped flower attached. Another golden blossom blooms in the center.

Ritsu wears a black glove on her right hand, a black headband, and a pair of black hoop earrings in "Listen!!."

Ritsu's "NO, Thank You!" Instead of her yellow headband, she wears a white one.

Ritsu's alternate outfit in "NO, Thank You!" She's dressed in yellow shorts with blue tights. Her hair falls down since she does not wear a headband.

Ritsu in her "Singing" outfit. She doesn't wear a headband like the rest of the band, instead opting for a white beret.